Yesterday’s speech by Federal Reserve Chair Janet Yellen roiled markets across the globe. Any increase in US dollar interest rates has been postponed yet again. As a consequence, it is not surprising that the dollar tanked, and gold jumped higher in a spell of <frenetic short-covering>.

While Fed officials often speak in a nuanced way, Ms Yellen’s words were crystal clear: “I consider it appropriate for the committee to proceed cautiously in adjusting policy.” Fed Fund futures now indicate that there is a near-zero probability that the Fed will raise interest rates at its next meeting that begins on April 26th.

I think the following Wordle illustrates what she is really worried about. 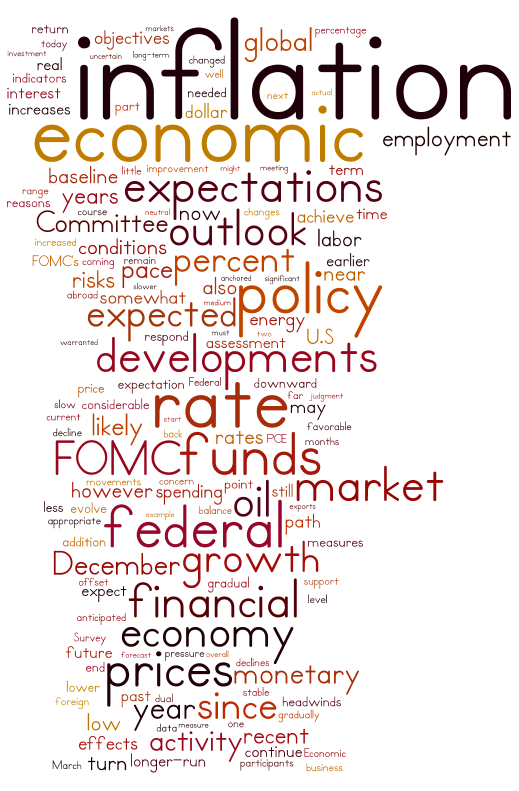 It is “inflation” that dominated Ms Yellen’s speech, appearing 57 times, while “global” received much less attention. It was used only 11 times, compared to 51 for “price” and “prices” together. Even “oil”, at 17, got more attention than “global”.

Of course the important unanswered question is whether Ms Yellen is worried about too little inflation or too much.

In this regard, the word “expectation” and its plural together were used 55 times. So Ms Yellen is giving a lot of attention to the future and what people expect will happen to prices and their cost of living.

Inflation expectations were subdued for some time because of the collapse in commodity prices, but that was a one-time event. The impact from that event has now passed, and has already been factored into past inflation reports. Importantly, commodity prices have begun rising.

Crude oil prices recently bounced back to $40, which is 50% above their low price in early February. And the tangible asset most sensitive to any expectation for higher inflation – gold – has jumped 18% since its December low.

Throughout this decline in commodity prices, inflation in services, seen for example in rising medical costs, continued their steady rise. When coupled with higher housing costs and commodity prices that have begun to turn higher, the CPI is now 2.2%, above the Fed’s 2% target. That should be worrying everyone, particularly Fed officials.

So to find out what Ms Yellen is really worried about, we need to read between the lines of her speech. After all, central bankers only tell you what they want you to hear.

To me the conclusion is obvious. Ms Yellen is worried about higher inflation, which is what the markets are telling us.