September 13, 2010 – I am pleased to present the following article written by Mark Lundeen. He explains why the Barron’s mining stock average has outperformed the Dow Jones Industrials since 1920. The analysis excludes dividends on both averages, which in itself could be an interesting study. Nevertheless, his conclusions are thought provoking and worth considering, two of which are particularly important.

First, on an inflation-adjusted basis, the capital in your stock portfolio (as measured by purchasing power) may be eroding. Second, after years of lackluster performance compared to historical returns, the gold and silver mining shares are about to excel. I wholeheartedly agree with both of these conclusions.

Barron’s began publishing data on its Barron’s Gold Mining Index (BGMI) in 1938. It’s the sole survivor of the now discontinued Barron’s Stock Groups (1938-88). In 1938, the BGMI consisted of two stocks, Homestake Mining and Alaska Juneau Gold. One of my readers from Australia, Geoff, was kind enough to dig through old issues of the New York Times, and sent me 18 years of data on Homestake Mining, which allows me to derive the BGMI going back to 1920.

A note on my Currency in Circulation (CinC) data is also in order. CinC is comprised of paper dollars and coins circulating in the economy. Barron’s first published weekly CinC data in its 23 February 1931 issue. My CinC data prior to that date is from A Monetary History of the United States by Milton Friedman and Anna Schwartz and is usually a yearly data point. No need to have weekly data when something changed only a little from year to year. In 1920, the Federal Reserve would never have dared to increase CinC to a point where weekly values were required. By 1931, I guess they figured they could get away with it.

CinC is only one measurement of monetary expansion; and admittedly, not a popular one with economists. But it has a long history, and its construction is so simple that it resists the kind of distorting modifications that plagues most long-term government statistics, such as CPI. CinC also tells the US dollar’s 20th century story of inflation quite well. 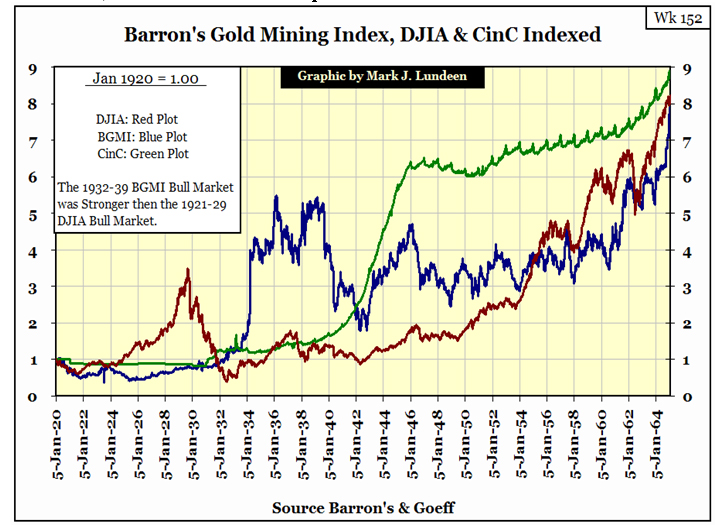 It’s interesting seeing how the DJIA, and the BGMI can be nicely counter-cyclical to each other for years at a time. But that doesn’t mean there aren’t long periods where they can’t rise and fall together. From 1954 to 1964, both increased in valuation, but clearly inflation was favoring the DJIA.

Remember, this isn’t science. Science, and common sense, tells us that exposing gasoline in an oxygen enriched atmosphere to an open flame will instantly result in combustion every time it’s attempted. But economics and investing don’t work that way. Exposing assets to inflationary flows can lead to rising asset prices, but not always immediately or every time. Everything depends on how individuals and businesses spend the new dollars, created by the Federal Reserve via bank loans.

History shows that the consequences of monetary inflation can be delayed for decades. This favors the “policy makers”, as it’s difficult to associate economic consequences with their inflationary actions taken years or decades before. For instance, Doctor Greenspan inflated stock valuations to a point where the DJIA yielded only 1.3%. That was over 10 years ago, and we will be suffering the consequences of his bubble market for years to come. But few link Greenspan’s inflationary actions to our current economic consequences.

We must remember that with the creation of the Federal Reserve in 1913, monetary inflation has been a constant factor in the financial markets. Where new money creation flows to, and flows from, is best seen by which particular asset class is experiencing a bull or bear market. The Dow Jones Industrials and Barron’s Gold Mining Index are excellent proxies for the two major areas where inflation flows circulate:

Those times when monetary inflation is flowing into financial assets (DJIA bull markets) are described as times of “economic growth” by the “policy makers.” They can be. But the soaring valuations at the end of the DJIA bull market are purely an inflationary phenomenon.

Wartime government controls on prices and rationing of food and manufactured goods kept prices down as CinC increased significantly. Still from 1942-46, both the DJIA and the BGMI doubled in value. These gains in both the DJIA and BGMI fell far short of the increase in the money supply (see table below).

During the excellent bull markets in the two decades following WW2, both the DJIA and BGMI caught up with CinC inflation, but as you can see in the chart above, the BGMI lagged behind the DJIA from 1946-64.

After WW2, something else was catching up with CinC – consumer prices. Just like today, most academics at the time blamed “inflation” on rising prices without identifying the source cause of the cost-of-living increases. But there were those who knew the truth, and were not afraid to tell the pubic the real reason for rising prices.

“We hope that the government of the United States, despite the big spenders, and the gold tinkerers, maintain a sound dollar, a dollar worth saving, a dollar worth earning, and a dollar that can be traded in any part of the civilized world.” – Barron’s World at Work, 02 January 1950, Front Page

Keep in mind this post-WW2 period where CinC gains far outpaced both the DJIA and BGMI, only to have the DJIA and BGMI catch up years later. Our current era in market history is very similar to this 1942-52 period. It’s reasonable to expect a similar delayed catch up to inflation for both the DJIA and BGMI in the years to come. But once again, these two indexes are running counter-cyclical to each other, as I explain below, so I expect the BGMI will lead the DJIA for sometime to come.

Let’s look now at the following chart from 1920 to 2010. Note how the DJIA (Red Plot) during its 2000 & 2007 market highs never exceeded the green CinC plot. It’s evident that since 1965, the general stock market has not kept up with CinC inflation. 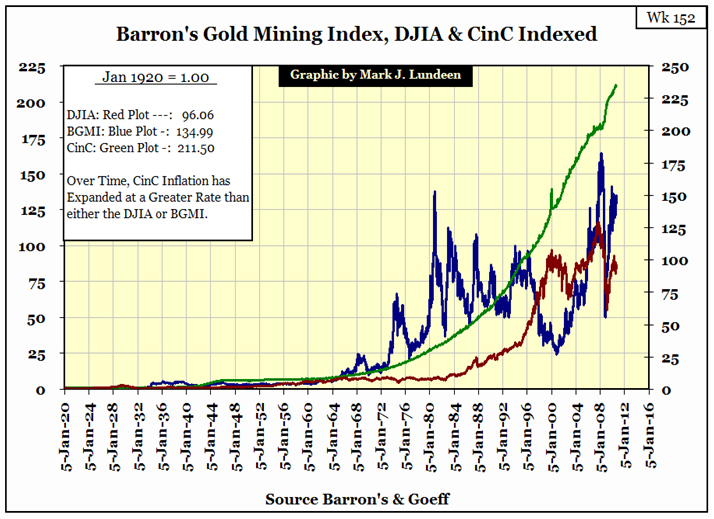 For 26 years, the lows of the BGMI were set by the rate of CinC expansion. There were 5 times when the BGMI deflated from a high, only to bounce off the CinC plot. The last time was in 1989, two years before the BGMI slipped below the CinC plot in 1991. But the BGMI didn’t completely decouple from CinC until 1996, when it finally collapsed in the face of Doctor Greenspan’s NASDAQ bubble market.

I’m not saying the BGMI was a great investment from 1980 to 1996. It wasn’t. But for 31 years (1965-96), the BGMI kept up with, or exceeded the rate of CinC inflation. That’s darned impressive! When one compares the DJIA’s response to CinC inflation from 1920 to 2010, on the whole the Dow Jones Industrial Average has not kept up with the US government’s monetary printing presses.

These results can change greatly depending on the start date chosen. But choosing January 1920 as the starting point, only 6 years after the creation of the Federal Reserve, we have a long-term view of the impact of the Federal Reserves’ inflation on real and financial assets, during a period when the US dollar lost over 95% of its purchasing power.

In my last chart that follows below, the plots are ratios of the DJIA and BGMI to CinC. Here is what I did.

These plots are not recording dollar values, but how the DJIA and BGMI have increased or decreased relative to CinC over time. Whenever the blue BGMI or red DJIA plots are at the green 1.0 Line, they have expanded at that time as much as CinC itself since 1920. This chart is the best method of showing the inflation and deflation (bull and bear markets) in the BGMI and DJIA since 1920. 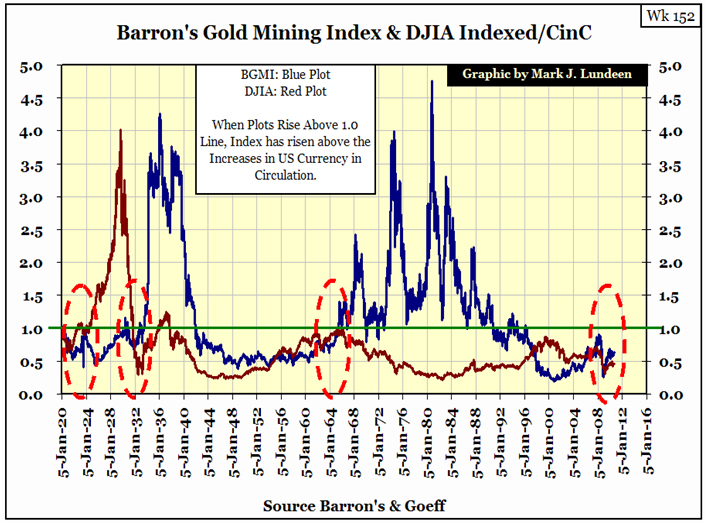 Let’s look at the 3 major DJIA bull markets seen in the chart above:

In other words, monetary inflation has created a situation where investors are losing purchasing power as their “investments” increased in terms of a flawed currency. So not only is the government stealing our wealth with inflation, but has the nerve of taxing us on our “capital gains” that are frequently real capital losses when viewed in terms of purchasing power.

There is one more item to cover in the above chart. I placed 4 dashed red ovals on the green 1.0 CinC line. These were episodes of market history where both the DJIA and BGMI were dithering below the rate of CinC inflation, just before one of them (but never both of them) began increasing at a rate far above the rate of CinC inflation. The DJIA only managed to do this in the 1920s, but the BGMI has managed to increase at rates greater than CinC inflation twice, with the second time lasting from 1965 to 1996.

Who knows what will happen next? But it’s a reasonable assumption that the BGMI will continue increasing at a rate that exceeds CinC inflation, long enough to drive the BGMI plot far above the CinC’s 1.0 line.

It’s significant that with no promotion from Wall Street, and frequent ridicule from the “experts”, the BGMI in nominal terms has still managed to increase by 420% from January 2001 to September 2010. This as the DJIA has declined by 2.01% in the same period. When taking CinC inflation into account, the results are even more startling.

Gold and silver mining shares are only a tiny segment of the general stock market. In 2010, the global bond and stock markets have serious structural problems. Bond and dividend yields are at historically low levels at a time when discussing sovereign debt default is no longer taboo. We have a perfect situation for another round of panic selling of financial assets.

If in the event that trillions-of-dollars of “liquidity” should begin draining in earnest from financial assets, hard assets would benefit, causing explosive gains in gold mining shares that may be as great as they were in the early years of the 1930s. Why not? In many respects our situation 80 years later is actually worse:

The potential for explosive gains for all classes of mineral production, including exploration companies, are exceptional.