Preparing for the Grexit

May 23, 2012 – The Grexit, or Greece’s exit from the euro, is becoming more likely, judging by how frequently it is mentioned these days.  Unfortunately, preparing for it may be more difficult than many believe. Before addressing that point, I would like to first illustrate the extent of the problem. 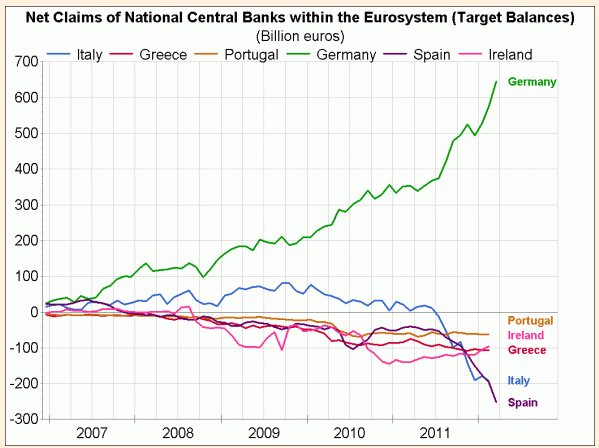 This chart was included in an excellent article by Mish (a/k/a Mike Shedlock) on his Global Economic Analysis website.  He notes: “One chart is all it takes to prove a full-fledged European bank run…is well underway in the Club-Med countries and Ireland”, i.e., the so-called PIIGS.

There is a lot more in Mish’s article, which I recommend reading. But I would like to use the above chart to make an important point about the Grexit.

It is clear that money is flowing from the PIIGS into Germany, and the reason is simple. People in these periphery countries are fearful that if their country leaves the eurozone and their national currency is re-launched, they would lose purchasing power.  This problem is particularly acute for the Grexit, as it is widely believed that a new drachma would be worth 40% less than the euro. A devaluation of that magnitude is necessary to make the Greek economy competitive once again.  But note the title on the above chart – “Net Claims of National Central Banks within the Eurosystem”. There are two important points to make.

First, Germany is in effect lending money to these countries through the ECB and the so-called Target system. If Greece exits the euro and changes its external liabilities to Germany from euros to drachmas, Germany would take a 40% hit on its asset. Is Germany willing to accept that big loss?  Note from the above chart that the PIIGS owe Germany €640 billion.  This huge debt is about 25% of Germany’s GDP, and it doesn’t even include all the other debts owed to Germany by the PIIGS.  One has to ask, what will Germany do to protect itself if any of the PIIGS leave the euro?

Second, each European state has a national central bank, which contrasts to the US monetary union where the dollar circulates within the American states. If money moves from California to New York, there is no New York central bank to record that state’s claim on people living in California. But Germany knows exactly where all of the euros flowing its way are coming from on both an aggregate and individual basis. In other words, the euros from the PIIGS are deposited in German banks, and every bank knows the name, address and nationality of each depositor.

So let’s assume Nico transfers euros from his Greek bank to his bank account in Germany before the Grexit. Nico thinks his euros are now safe, but are they?

What if the Eurocrats in Brussels decide that Nico was “speculating” with the “hot money” he transferred to Germany? Even though Nico was simply acting prudently seeking what he thought was a safe-haven for his life savings, which were held in euros, the Eurocrats could easily make the claim he was speculating because he moved the money out of Greece, his home country.

So to put their words into action, the Eurocrats determine that coincident with the Grexit and re-launch of the drachma, all euros deposited in banks anywhere in Euroland by Greek nationals becomes a drachma deposit. Germany is saved because it no longer owes euros to Nico. But Nico’s life savings are not safe after all. And the same thing could happen to Juan, Paddy, Luigi and their countrymen in the PIIGS, if they think that moving their euros to Germany is safe.

There is only one way to seek safety from fiat currency – exit the fiat currency system altogether. The only way to do that is to buy tangible assets. Nico should have instead bought gold.