October 30, 2009 – There were six bear market rallies in the Dow Jones Industrials Average from the October 1929 stock market crash to the Great Depression low point in July 1932.  These rallies are plotted on the following chart prepared by Chart of the Day. 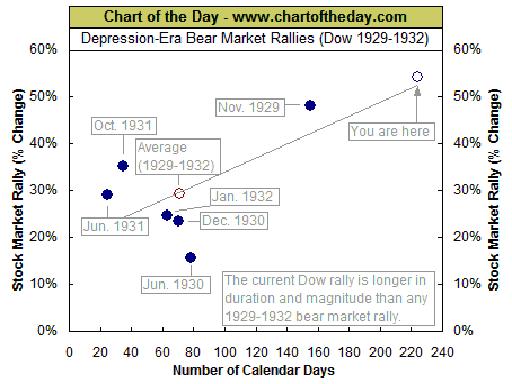 The above chart also shows the current bear market rally in the Dow Jones Industrials Average with the tag: “You are here.”  It concludes: “The current Dow rally is longer in duration and magnitude than any 1929-1932 bear market rally.”

In other words, it is different this time.  Given that it is indeed different, we need to ask, why?  There are several possible answers.

We can simply accept the current rally as an aberration compared to historical experience.  Then again, some might argue that it is not relevant to compare the market today to that of the Great Depression because economic activity has not declined to the same extent it did back then – at least not yet anyway.  Others will claim that the market is performing its traditional role as a prognosticator of future economic activity and that it is rising simply because it is forecasting better times ahead.  But I don’t accept these arguments or the others being bandied about to explain the phenomenal rise in the Dow since March.

It is indeed different this time because the US dollar is on the cusp of hyperinflation.  Too many dollars are being created, and they need to end up somewhere.  And as happens in all hyperinflations, the excess dollars end up in the stock market, bidding prices ever higher in nominal terms of the national currency being inflated that is used to measure prices.